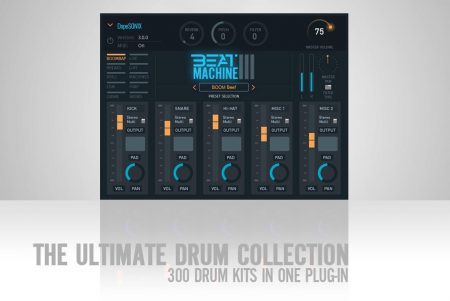 Beat Machine 3 – VST/AU Is Out Now

When we released Beat Machine 1 and Beat Machine 2 these were aimed directly at the the Hip Hop producer market. We realised that if we made another VST drum machine we had to expand our horizons and explore new genres. With Beat Machine 3 we believe we have managed to create an drum machine plug-in that covers pretty much every […]

Hype – VST/AU Is Out Now

It has been a while since we released our last plug-in LoFi but in that time we have continued working hard on dope new VST’s specifically designed for producers seeking up to date and professional sounds. With Hype we have decided to create an easy to use yet versatile plug-in that will enable you to […]

LoFi – VST/AU Is Out Now

It has been two years since we released our last plug-in Bass Engine 2 but in that time we have been working hard on a dope new collection of VST’s specifically designed for producers seeking fresh sounds intended to be used right out of the box. With LoFi we have decided to create an easy […]

It has been two years since we released our best ever selling plug-in “Bass Engine” and we are delighted with the response we have received from all the Hip Hop producers that have brought it. The one request we have heard more and more though, was the need for more 808’s and vintage analogue sounding bass […]

Its that time again… Its been a long  time in development but Beat Machine 2 is finally here and we are pleased to announce it came out better than expected. When we thought about making a follow up to Beat Machine we realised we had to push things up a level, it had to be bigger, it […]

Crate Digger – VST/AU is out now!

When we released our debut plug-in Beat Machine a year ago, we knew many beat makers drum problems had been solved, 6 months later when Bass Engine was dropped onto the public, the low end problems encountered by so many was helped too. It became obvious to us that to complete the Hip Hop producers toolbox we had […]

Bass Engine – VST/AU is out now!

Bass in your face… Due to the massive success of our debut plug-in Beat Machine, we knew we had to the deliver the same fantastic quality in our next release and here it is. Bass Machine was initially developed due to our frustrations with the Bass synths already available on the market. If you wanted a VST […]

Beat Machine – VST/AU is out now!

The time has come… Its been nine long  months in development but our debut product is finally here and damm we are so happy with it and we hope you will be too. We started this project initially as a tool to help our own Hip Hop productions, over the years we had collected a […]